Schrader One of Two Honored with Hardesty Scholarship 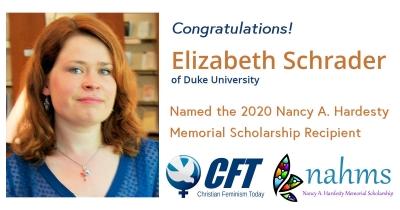 Indianapolis—Thanks to a generous donation, EEWC-Christian Feminism Today has been able to award two full scholarships for the seventh annual Nancy A. Hardesty Memorial Scholarship. The recipients are Elizabeth Schrader of Durham, NC, and Shavon Walker of Fremont, CA

Ms. Schrader is a doctoral candidate in the Department of Religion at Duke University in Durham, NC. Her studies focus on early Christianity and the New Testament. Already a published scholar, Ms. Schrader says that one of her primary research interests “is to explore the profound effect that New Testament textual criticism can have on both biblical exegesis and feminist theology.”
In a paper published in 2017 in the Harvard Theological Review, she posits that Martha may have been a second-century editorial addition to the Gospel of John, added for the purpose of downplaying the importance of what may actually have been Mary’s confession: “Yes, Lord, I believe that you are the Christ, the Son of God, the one coming into the world” (John 11:27).
Ms. Schrader believes her theory can have great significance for biblical feminism because, in one of the significant New Testament texts about women, “the scripture has not only been misunderstood—it may have been misrepresented by those whose task it was to hand down the text.”

Shavon Walker is a candidate for the Master of Divinity Degree at American Baptist Seminary of the West in Berkeley, CA. For the last two years, she has served as Seminarian in Residence at First Baptist Church of Berkeley, where she preaches regularly and leads worship services.

Ms. Walker believes that a Christian feminism informed by womanism and intersectionality “will allow women of all categories to not only perform their ministry unfettered, but aid in the edification of many other marginalized groups through that ministry.” Issues such as the Black Lives Matter movement, reproductive rights, and the current Covid-19 pandemic, says Ms. Walker, are social justice concerns that can be addressed uniquely and positively by a Christian feminist outlook.

The Nancy A. Hardesty Memorial Scholarship is awarded to a student who aspires to exemplify the values and achievements of Nancy A. Hardesty, a founding member of the EEWC-Christian Feminism Today organization. The purpose of the $1,000 scholarship, awarded every June, is to help a student who wants to be in a leadership role that supports and promotes Christian feminism.

Nancy A. Hardesty (1941–2011) was a founding member of the Evangelical Women’s Caucus, which, over the past 47 years, has grown into EEWC-Christian Feminism Today. Until her death, Dr. Hardesty was a professor of religion in the Department of Philosophy and Religion at Clemson University, in Clemson, SC.

Previously, she had taught English and writing at Trinity College in Deerfield, IL, and had worked on the editorial staffs of Eternity magazine and The Christian Century.
Ms. Hardesty’s first book, coauthored with Letha Dawson Scanzoni, was All We’re Meant to Be: A Biblical Approach to Women’s Liberation. Originally published in 1974, the book has gone through several editions and has influenced countless Christian feminists, from evangelicals to mainline Protestants to Roman Catholics. In 2006, Christianity Today magazine ranked All We’re Meant to Be among the top fifty books that had influenced the evangelical Christian movement for over half a century.

For more information about EEWC-Christian Feminism Today or the Nancy A. Hardesty Memorial Scholarship, contact Jeanne Hanson, Coordinator, at office [at] eewc [dot] com or 317.721.3660.